The BBC News website’s ‘Scotland’ section today aggregates and amplifies front pages of the
Scottish editions of newspapers. This is a regular online feature of this BBC website’s coverage of
Scotland. Radio 4’s Today programme regularly amplifies the views of the UK corporate media in
its daily newspaper review. However, is it only for editions of newspaper in Scotland that the BBC
regularly provides free online advertising? Does this happen on the BBC News website’s pages
for England, NI and Wales too? Someone reading TuS will no doubt know if Scotland is again
being blessed with special BBC treatment!

Amongst today’s choice of ‘Scottish’ front pages, the BBC picks out the Sunday Express. It
‘helpfully’ tells us that: “The Sunday Express says the number of people being vaccinated in
Scotland has slumped to its slowest rate since early March. It comes as the Scottish government
insists the programme is still on track.” The BBC’s caption has by juxtaposition ensured the
implication – the intended take-away message – is crystal clear to the reader. (Note, I did not seek
to access the whole Express article so can only ponder whether the ‘on track’ part is taken from
the Express or added in by the BBC.) Any Express readers visiting TuS?

From the Express front page, again ‘helpfully’ reproduced by the BBC, we see this: 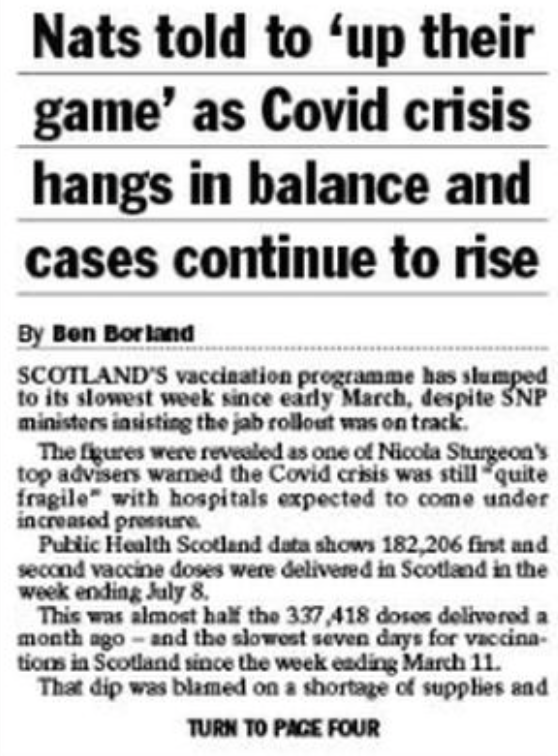 So what’s actually happening on vaccination numbers? Long experience suggests there might be
more to this matter than the Express is reporting. And many will already realise that if there is

relevant context or useful perspective to be had – to help enhance public understanding – one
can’t rely on the BBC providing this, at least on matters deemed political in Scotland.

Facts in perspective
The UK government’s own data on numbers vaccinated are useful here (see: https://
coronavirus.data.gov.uk/details/vaccinations ). What follows are screenshots of relevant graphs
available on the UK government website with the addition of horizontal red guidelines to help
compare the number of vaccinations (first plus second jags) delivered in the week ending 8 July
with prior performance.

UK VACCINATION DAILY FIGURES INCLUDING BOTH FIRST AND SECOND DOSES

From the above it can be seen that the total number vaccinated in the UK in most recent week
was the lowest since early January 2021 – effectively the lowest ever 7-day average.

SCOTLAND DAILY FIGURES INCLUDING BOTH FIRST AND SECOND DOSES

The above graph for Scotland does indeed reveal the relatively low total number in the most
recent week, at a low level not seen since early March. Relative to the UK it is far from being
exceptional!

ENGLAND DAILY FIGURES INCLUDING BOTH FIRST AND SECOND DOSES

The above graph for England reveals a similar pattern, unsurprisingly, to the UK: current levels of
vaccinations are at a low level (7-day average) not seen previously.
The questions
What is the more newsworthy – the UK or England’s all time low or Scotland lowest since March?
Who needs to ‘up their game’ to coin the phrase favoured by the Express?
It’s relevant to recall that at this time it is the UK’s (and England’s) Westminster government that is
proposing to remove all or almost all public health mitigation measures. And it is relevant to recall
that the same government is justifying this through the trumpeting of vaccination programme
success. So why at this time – as ‘freedom day’ approaches – is this lowest 7-day average rate of
vaccination delivery across the UK not the concern of the Express and the BBC? Especially when
only 65.6% of the 18 and over UK population has had two Covid jags? Why is the focus
particularly on Scotland and it government? I suspect regular visitors to the TuS site know the
answer only too well! Public health is being trumped by some other agenda.
If numbers of Covid vaccinations are at what is effectively an all time low at the level of the UK,
why is this? Could the ‘blame on supply’ actually be correct? And if correct what is it that the
Express (and the BBC) expects the Scottish Government (aka ‘the Nats’) to do and be able to
achieve by ‘stepping up their game’ regarding vaccine manufacture and supply?

Only here, comments like: I would add a cautionary note to your otherwise excellent point'

Only here, comments like: I would add a cautionary note to your otherwise excellent point'