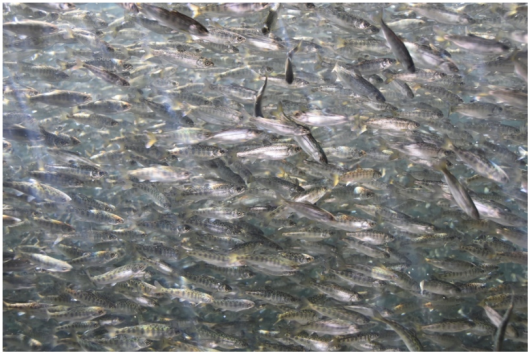 More for an increasingly worried Monica to bump her gums about. From news.gov.scot the latest annual Scottish Farmed Fish statistics show an increase in employment (5.5%) in the Scottish Atlantic Salmon sector and an encouraging commercial development of the biological control fish sector. Link and snippets below. See that SNP Scottish Govt? – See the Day Job thingy? Nae a bad performance hey there Monica!

(This growing and hugely important sector of Scotland’s economy is being put under real risk by the UK Brexit shambles – please note all those who wonder why SNP Scottish Govt place such emphasis on avoiding a No Deal Crash-Out).

(Worth noting – In addition to the’ traditional’ production of Atlantic Salmon there is the incipient development of commercial production of biological control species: In 2018, lumpsucker and various species of wrasse were cultured for use as a biological control for parasites in the marine Atlantic salmon industry. In total, 553,000 lumpsucker and 103,000 wrasse were produced with 1.5 million and 37.0 million ova being laid down to hatch respectively).

Fisheries Secretary Fergus Ewing said: “Aquaculture is vital to our rural economy, generating more than £620 million of added value to the Scottish economy every year, and supporting thousands of jobs in some of our most fragile coastal communities.

Another step towards a successful IndyRef 2 campaign.